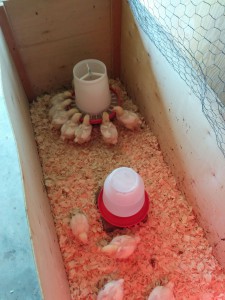 Last year we raised nine meat birds for the first time. In the past we have butchered a few roosters which we got by letting a hen hatch some eggs for us. This is a nice and simple way to increase the laying population, but we also get some roosters that need to be integrated into the flock or eliminated. The take five or six months to reach maturity and tend to be rather lean and tough – which is good in a living bird, but not so good for dinner. So last year we decided to see how real meat birds would be to raise and eat. What a difference! They mature in seven or eight weeks (yes, that’s weeks, not months) and are so fat and juicy and tender. Se we are doing it again this year. We are going from nine to 15 birds this year. They are currently at about three weeks. We never seem to get over how fast they grow and fat they are at such a young age.

I still have trouble with raising and killing these animals, but at least it is for food and not sport. That I just can’t imagine. Certainly, some people hunt for sport and eat what they kill. I don’t consider myself any more riteous than anyone else, but I can’t understand how someone can shoot an animal in order to put its head on a wall. End of rant. 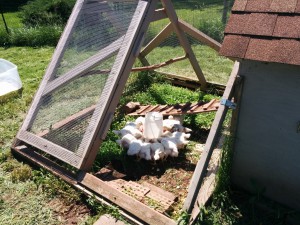 The peeps, if I can still call them that, went outside this morning. The nights are expected to be in the 50s for several days and they are pretty well feathered out, so they should be fine. We spend a half day getting the nursery coop ready for them and they seem happy to have a little more space and some fresh air.

We started feeding them the 24% protein starter food and they finished the bag (40 or 50 lbs), so now they have been switched to the normal starter/grower at 20% and we are letting them run out of food in the evening so they have some time when they are not eating.

We have a processing date at eight weeks, which is a week later than we processed last year. I hope they can still walk by then. These are going to be some very large birds. 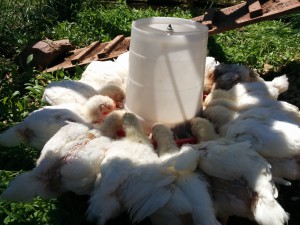 This entry was posted by todd on May 9, 2016 at 3:52 pm, and is filed under Chickens. Follow any responses to this post through RSS 2.0.You can leave a response or trackback from your own site.