1
by joni in Dogs

After dealing with the growth on Ellie’s face for 5-6 weeks, we decided to risk surgery and have it removed.  It just became too difficult for us to manage as the growth would bleed profusely at the slightest bump and easily became infected.  Poor Ellie was just miserable, between wearing the e-collar all the time and us trying to keep the growth cleaned, it felt like we were torturing her.  We took her into the clinic early the day of her surgery in order to complete some testing first.  We had decided that if her blood work looked good, we were going to go for the surgery.  We understood the risks associated with anesthesia were higher in her case as she has a heart murmur and some arrythmia had been noted.  We felt that if she did not survive the surgery, at least she would not be awake and wouldn’t suffer any pain.  She was starting to get so upset each time we had to work on cleaning her up and her heart rate increased to the point that I was afraid she might suffer a heart attack and then she would suffer a painful death.  Her blood work came back in all normal ranges so the surgery was a go.

Dr. Bramson performed the surgery and Dr. Keane also came in to help monitor the anesthesia.  Nancy and I were both in surgery to assist the doctors, so Ellie had a lot of people working to make sure she came through in good shape.  She was just lightly under anesthesia and for as short as time as possible.  She was pretty out of things for the rest of the day and through the night, which was to be expected.  By the second day she felt like eating a bit and was on the road to recovery.

She developed a lot of edema below the surgical site and her poor face was so swollen for several days but now she is looking really good and it is such a relief for her as well as us to be rid of that growth.  Oh, and May 18 was Ellie’s birthday – 14 years old!  I’m so glad she could celebrate the day without the e- collar!  Happy Birthday, sweet girl! 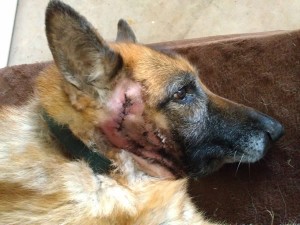 the day after surgery 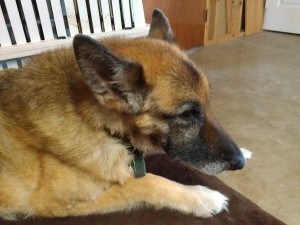