2
by joni in Coop project 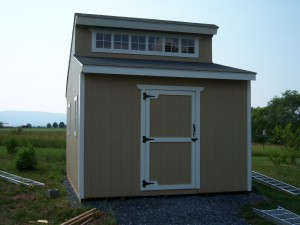 This was a good day – getting the front door finished and finally a fully weather proof structure!  Adding the white trim boards at the corners and around the windows really adds a nice touch.  It is looking so nice that we often comment on turning this into a guesthouse!  It really does seem way too fancy for chickens, at least on the outside, but that part is more for our enjoyment.  So I came up with the name “Gallus Palace”, (Gallus is both the genus and species name for the domestic chicken) and what a palace they will be living in.

I am really excited about all the storage space that we will have for all of our chicken supplies.  It will be so nice to get all that out of the garage and have it closer to where the chickens actually live.

We’ve started on the secure outdoor run and are hoping to be far enough along to move this year’s chicks in the next week or so.  We really need to free up that small coop where they are currently residing so we can get the guinea keets moved outside.  The next steps will include adding the hardware cloth to the entire structure as well as burying about a foot of it in the ground all around the perimeter to keep digging critters from helping themselves to a late night chicken dinner. 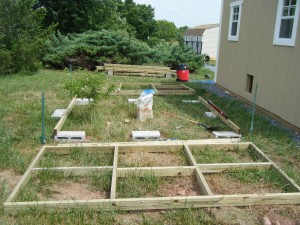 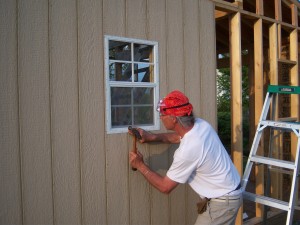 When we decided that we wanted more chickens, we knew that we would also eventually need more living space for them. There are really three different types of space involved: interior space that is safe and weather protected, a ‘run’ that is safe from predators but is outside, and field space where they can wander around in the grass and scratch for treats like clover, bugs and worms.

First we thought we could build something like we built before only bigger. A couple of years ago we built two custom coops that can comfortably hold ten and five, respectively. With 16 chickens we were pretty much at capacity. A year ago we only had 12, but wanted to allow one of the hens, Tilda, to raise her own chicks. This worked out beautifully, but required the small coop as a nursery, leaving the remained 11 in the larger coop. This spring we got 20 more chickens, so we know we needed a lot more space.

So building a larger coop was our first option, but later we thought we might not have the time or initiative to design/build something ourselves. We researched pre-built coops only to find that they were rather expensive – even kits. We looked at generic pre-built sheds and realized that they were not quite what we wanted and still a bit expensive. We would have to modify a shed with better ventilation, more light, better access. an internal wall for storage, etc.

So back to the design/build option. We looked at lots of designs on the Internet and started to formulate our ideas. We really liked some designs with a clerestory wall with windows for light. That wall on the inside created the separation for a storage area. I bought a simple drafting/drawing program called Home Plan Pro and started to design the coop. 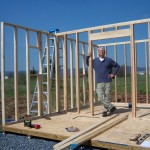 some walls go up

The design started with a 8′ by 12′ footprint, but quickly changed to 8′ by 14′, followed by 10′ by 16′, and finally 12′ by 16′. I liked the multiples of 4′. I was thinking in terms of sheets of plywood. It was a bit annoying each time I had to lengthen or widen the design, but we figured if we were going to all this trouble, we might as well make it big enough to provide room for all of our chickens as well as storage for their ‘stuff’. On paper it looked nice, but I didn’t fully appreciate its size until I put up the first walls. It was a lot taller than I imagined. I was using 8-ft studs for the walls, but lowered the design to 7′ 6″ so the siding would attach to something on the top and bottom.

The whole build process is on my Chicken Coop Picasa album. This includes everything from site prep to the shingles I put on yesterday. 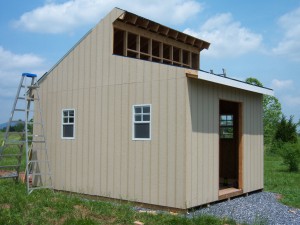 The palace is progressing

Meanwhile, the original chickens and Tilda’s babies are all living in the original coop, the new babies (who are now about 7-weeks old) have moved outside to the nursery coop. We need the new chicken palace to be ready for action very soon. I haven’t even started to think about the run or the yard. The run will take some time as it needs framing and lots of hardware cloth. The yard will be perhaps 15,000 sq. ft. so will need quite a lot of perimeter wire fence. It will be a good day when this job is finished, the chickens are installed, and I am sitting in the yard with an ice tea enjoying the scene.