1
by joni in Dogs 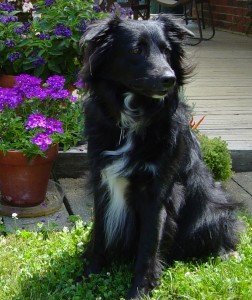 Bob was born in the spring of 2000.  I had been thinking it might be nice to bring a new pup home for companionship for Ellie while I worked during the day, but I wasn’t really in the market for a puppy when I saw a sign at the pet store for “Free Border Collie mix puppies”.  I was just going to stop by and look at them – I should have known better.  They were all very cute, of course, but one pup attached himself to my leg and did not stop looking at me the entire time I was checking out the other puppies, so how could I refuse him!  I thought he looked like a “Bobby”.  I will never know why he fell in love with me like that, but it became quite evident when we got home that I was the ONLY one that he loved.  I don’t ever remember seeing a puppy act quite like that before.  He was not playful or friendly with anyone else and ran away and even growled and snapped at other family members, even though he was the sweetest little thing for me and just stared into my eyes adoringly.  This behavior continued for a few months.  The situation became so bad and everyone else was so unhappy with the new pup, (who had become just Bob, definitely not a Bobby), that I actually drove him to the animal shelter with thoughts of giving him up.  I had to give them a brief history of the pup and they explained that they had so many dogs up for adoption and too little help to work with an “unfriendly dog” and he would be euthanized.   I sat in the lobby crying my eyes out with Bob staring at me with those adoring eyes for nearly an hour.  I knew my family was not going to be happy, but I had no choice.  I could not leave him there to be killed when I was the only person in the world that he trusted and loved.

That was, gosh, 11 years ago.  Bob has mellowed over the years and will tolerate the presence of others, but it is still evident that he prefers only me and Todd.  Bob still looks at me like he is completely in love and now he looks at Todd the same way, but no one else – that’s it!

0
by joni in Dogs 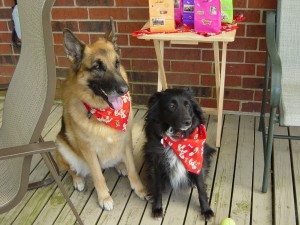 Meet our dogs, Bob, a Border Collie mix & Ellie, a German Shepherd.  This photo was taken a few years ago at Ellie’s birthday party.  She had 6 doggie friends attend the party where everyone enjoyed some social time and treats in the back yard.  Bob spent most of the party in the house after he growled at one of the party goers (he is a little lacking in social skills and prefers to spend his time with only us).  Ellie, on the other hand loves everyone and enjoys new experiences.