0
by todd in Chickens, Coop project 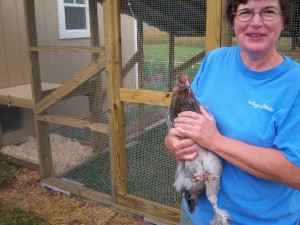 Move in Day at the Palace

Fifteen of the new chickens who are about 12 weeks old now moved into the new coop – Gallus Palace – yesterday. It was a s big a day for us as it was for the chickens. It feels like we have been building the Palace since the Eisenhower administration and it was a momentous occasion. We carried the birds over one or two at a time and although we were happy about it the chickens were not so sure. Being creatures of habit, they were initially frozen in their new surroundings. We set up food and water and after a few minutes they started to walk around and explore their new home.

We moved 13 hens and only two of the six roosters. We will be keeping Big Red and Duran for breeding. We left the three Partridge Rock roosters and the Egyptian Fayoumi in the nursery coop where we added the six guineas. This was the driving force as of late behind the effort to finish the Palace. The guineas have been living in the basement in a smallish box about 2 ft by 5 ft. They were clearly outgrowing that space and they were really beginning to stink up the basement. guineas are excellent fliers, unlike chickens, so we wanted them to go inside of the nursery coop with the roosters outside for a few days until they could get better acquainted. Last night after dark, we put the roosters into the nursery coop and come morning they all seemed to be resigned to these living quarters. We will keep the guineas inside the coop for another day or two so they get used to roosting in the coop. The main coop and nursery coop are both covered, so the guineas can’t fly away, but they will be virtually impossible to catch and we are hoping that they will learn to go into the coop at night. 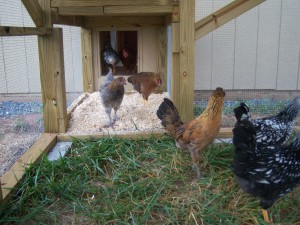 Eventually, we will move the guineas into the Palace and the soon to be fenced chicken yard will not be covered and the guineas will be free to roam the countryside. It is our hope that they will hang around for the free food and lodging, but there is no guarantee. We have read stories of whole flocks of Guineas just wandering or flying off and never returning

You can review the entire project through the Picasa photo gallery (139 pictures). 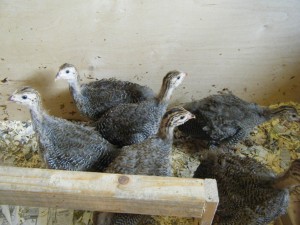 The keets are growing nicely and getting more used to us.  We are still not their favorite things in the world but they will tolerate us for a handful of mealworms or a stinkbug treat.  It’s not so easy to get a good picture of them as a group as they seem to be in constant motion, always on the lookout for the next bug.  Check out this head shot – “I’m ready for my close up Mr. DeMille”! 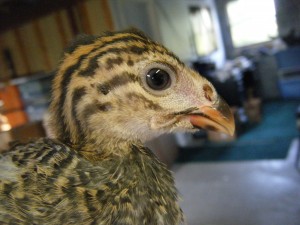 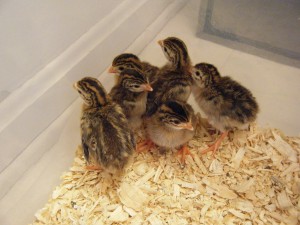 Last week six cute little guinea keets joined our farm family.  We are really hoping that they grow up to LOVE eating ticks and stinkbugs!  They are adorable, of course, but they are not taming as quickly as the chicks do.  They are still fearful and run to a corner whenever we are changing water or adding food in their little pen, even though we move very slowly and quietly around them.  We are trying to handle them several times a day and have found that they do better just allowing them to perch on our hand rather than trying to hold them.  My plan is to train them to come when called so we can lock them up at night.  I’ve read that the most difficult part of keeping guineas is finding ways to prevent them from becoming fox food.  Yikes!  We will have a very safe and secure place for them to roost at night but it won’t be worth much if we can’t get them to come back in the evening.  I can’t bear the thought of them falling victim to some nighttime predator when they have such a safe place available to them.  Well, all that is several months down the road.  For now, we will keep working on taming them more and finding the best treats to make them want to come to us.