0
by todd in Farm, Wildlife 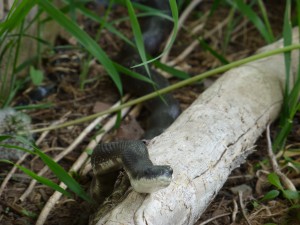 We have a lot of snakes around our farm and we like them. Either garter snakes or larger black rat snakes. This fine fellow showed up a couple of days ago and he was quite friendly. Joni moved him about 100 yards from the house, but he will be back. Normally, we would just leave him alone, but because the baby ducklings were due, we didn’t want the snake to think we were offering up any snacks. We have now moved the ducks into a more secure coop that a large snake could not get into, so he is welcome to return. We have found a couple of large snake sloughs recently, so this guy is not the only one in town.

I love this time of year when the mornings and evenings are wonderfully cool but you still have a warm summer’s day in between. The morning dew does magic things to delicate works of nature’s art such as spider webs. It’s especially beautiful to see a giant orb weaver web glistening with dew. We have several of these yellow and black garden spiders (Agriope aurantia) around the farm at this time of year and also a few barn spiders (Araneus cavaticus). The barn spiders are especially fascinating. They weave a huge web every night and sometimes in locations where they can be 3-4 feet across. To conserve silk, the spider consumes the web each morning and then rebuilds an entirely new web each night. I know spiders have a bad reputation and many people are terrified of them but I really appreciate them. It is amazing to watch an orb weaver create that spectacular web. I say let those harmless spiders hang around and eat all the flies, mosquitoes, and stink bugs they want! 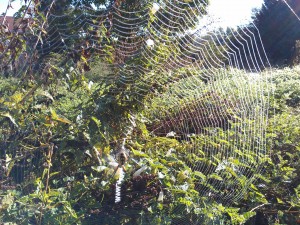 0
by todd in Honeybees, Wildlife

The herbs on our deck are blooming including the pretty violet flowers atop the slender chive stalks. I was excited to see several of my honeybees enjoying the flowers. When I looked a little closer, they appeared to be drones (male honeybees) with their large bodies and large black eyes. Then upon even closer inspection, I decided that they weren’t bees at all. I think they were hoverflies. I found a nice website with pictures of lots of different types of hoverflies at: http://www.microscopy-uk.org.uk/mag/artmay07/cd-hoverflies.html. The ones I saw seemed a little different than all the pictures, but there is a lot of variety in this family. One of the major differences between bees and flies is that bees have two sets of wings, whereas flies have only one. 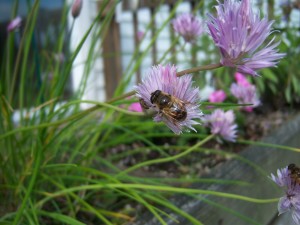 0
by todd in Wildlife 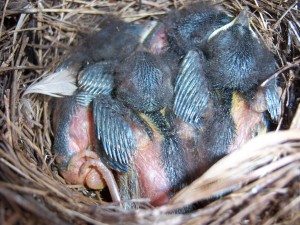 The first batch of bluebird babies this year.

The bluebirds have hatched out four or five beautiful little babies.

The first spring we were here, we put up 2 bluebird nest boxes and we had bluebirds nesting in both.  Apparently there was a shortage of good nesting sites in the area!  We did have a problem with rat snakes getting into 1 of the boxes that first spring.  We had been watching the parent birds take good care of the babies and it was getting close to the time that they should be leaving the nest.  One morning, I heard the adults making such a fuss that I knew something was wrong.  I looked out the window to see a rat snake hanging out of the nest box so I got out there as fast as I could to try to save the babies. I grabbed the snake hanging out of the box but he was able to slip through my hands and completely into the nest box.  I opened the box to find not one, but two snakes inside!  I got the snakes out and into a bag so I could transport them a few miles away and not have to worry about them coming back.  I had gotten there just in time because one of the baby bluebirds had a very wet head – I am sure it had been in the mouth of one of the snakes that I startled! So I closed up the nest box and drove the snakes to a wooded area a few miles from the farm and released them.  When I got home there was another snake hanging out of the same nest box!  Once again I ran out and bagged the snake and saved the baby birds.  Another drive to release the snake.  When I got home this time – yet another snake! I had never expected that so many snakes would be after the same little nest of birds.  What was worse, one snake got away as I was bagging one that was in the nest box.  Sadly, one of the baby birds was missing this time so one of the snakes did get a meal.  I found some grease to coat the nest box pole in an effort to keep snakes from climbing it and kept watch the rest of the day.  When Todd got home, we constructed  “snake guards” out of hardware cloth to mount under both nest boxes and have had no snake problems since.  The 4 remaining babies in that nest fledged successfully.

Every year since that first spring, we have had bluebirds nesting in one box and violet tree swallows nesting in the other.  Both species are beautiful and fun to observe. The tree swallows construct a very pretty nest that is lined with fluffy white feathers.  The bluebird nest had these 4 perfect little blue eggs in it yesterday.  I haven’t checked today yet, but there will either be another egg or the mama bird will start sitting.  She doesn’t start incubating the eggs until she is done laying eggs (1 each day).  That way all the eggs should hatch at about the same time. 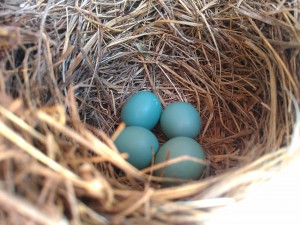 It isn’t unusual to come across a garter snake or a black rat snake around the property.  We even find the rat snakes hanging out in the garage on occasion.  I always enjoy seeing them.  I think snakes are fascinating animals and I know they are the reason we have never had a mouse problem.  This evening as we opened the overhead garage door to take trash down to the road, a rat snake was entangled in the door track and roller. We didn’t see it until the door was almost all the way up.  The snake was completely wrapped around and pinned behind the roller.  The poor animal was obviously fatally injured and the only thing we could do was lower the garage door enough to free it from the roller.  The snake was almost completely severed in two pieces, just an inch or so behind its head.  It seemed as though only a very small strip of skin was holding it together.  There was no chance that it could survive such massive injury, so together, we ended its suffering.  Putting an end to an animal’s life is not something that either of us wanted to do, but seeing it suffer so was even worse.  I guess it is all part of taking responsibility for this little parcel of land and all its inhabitants.