« Roundup is everywhere
Starting the garden in 2016 »

Today we processed our nine meat chickens along with 18 more birds from two other families. This isn’t large scale farming, but the largest undertaking of its kind for us. This was the second year for the other families but the first year for us raising meat chickens. These were some generic cross birds we bought at Tractor Supply eight weeks ago. Yeah, Eight weeks! They grow so fast. We have raised several other batches of layers from peeps and they don’t even go outside for eight weeks. And they don’t reach maturity for five or six months. These Cornish Rock crosses grow so fast and have completely different bodies. These are the grocery store chickens that the laying birds are not. We have butchered some roosters at about six months old in the past, and even though they are large and heavy, they just don’t have the meat on them that these birds have.

We had nine people to help with the process and we were quite efficient. We had a killing cone station, a very large cleaning/rinsing tank, one 150 degree dunking tank (dunking between 50 and 60 seconds), two plucking stations and two eviscerating stations. Joni thinks we could have used a third plucking station. We rotated jobs a bit, but Joni did the lion’s share of eviscerating and was very quick about it which was a key to our efficiency and success. The setup was an hour or so and the actual chicken work was only about three hours. Amazing. I was guessing it was going to take most of the day.

We got all the birds in coolers and went inside for a wonderful lunch. Thanks Hawes family. When we got home, I had to rearrange a bunch of beer to make room in the basement refrigerator. We will leave them in the fridge for two or three days and then put them in better bags for freezing. We decided that the Food Saver 11″ bags won’t quite work so we ordered some of the heat shrinking bags that should arrive in the next couple of days. We will also cut up most of the birds for parts, so these could go into the FS bags. The consensus is that a whole chicken is too big for a family of two, so parts is the way to go. 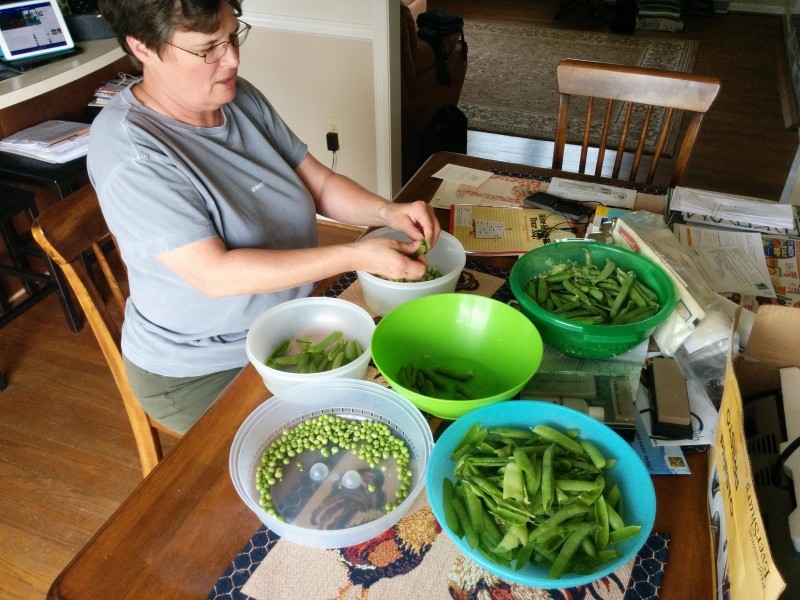 After we had taken care of the chickens for the day, we went out to the garden to pick peas. We got a few snap peas, but mostly picked regular peas. We got a couple of bowls full and shelled them. It’s a lot of work for what seems like a small yield, but we both really love them. They are one of the best vegetables to freeze. They are almost like fresh when thawed.

We spent most of the day working hard for our food. We thought about how this was a way of life many generations ago and were kind of glad we didn’t have to do it every day. But it was a very satisfying day for us.

This entry was posted by todd on June 13, 2015 at 10:06 pm, and is filed under Chickens, Garden. Follow any responses to this post through RSS 2.0.You can leave a response or trackback from your own site.