« Honeybees get their own blog
Meat chickens » 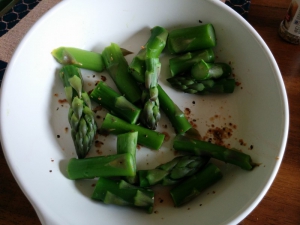 April sure is flying by. We had a little bit of cold weather after the garden was started, but then it warmed up again and everything has started to pop up. Unfortunately, the first ten or so shoots of asparagus came up and got bitten by the cold and kind of died back. This is year four and our plants are now very strong and as soon as it warmed up just a bit the second round of shoots came up and we had our first plate of steamed asparagus a couple of lunches ago.
[Show as slideshow]

The spinach came up, but it looked like perhaps slugs got to it, because the tender tip were all eaten. I tried to cover the spinach and the radishes the night before the 22 degrees, but the spinach is just gone. The radishes were chewed up a bit, but survived and now are starting to leaf out nicely. The onions look pretty good as do the snap peas, but the regular peas didn’t seem to germinate as well as they should have. They were pretty much planted directly into the new compost I had delivered and maybe that should have been mixed with some other soil. Yesterday I planted two more rows of regular peas which is three and a half weeks after the first planting. Hopefully they will ripen at least a week or two later then the first row.

I worked hard on the slightly raised bed where I planted potatoes last year and decided to plant it with potatoes again this year. It is a perfect spot for them and the ground is great for digging. I added a layer of chicken manure and added several inches of the new compost. About a third of the plants are just popping up and they look nice and healthy. This year I did half Yukon Gold and half some variety of red potato.

This entry was posted by todd on April 21, 2016 at 10:31 am, and is filed under Farm, Garden. Follow any responses to this post through RSS 2.0.You can leave a response or trackback from your own site.